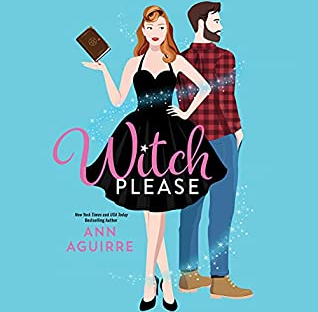 Witch Please is the first book in the Fix-It Witches rom-com series by Anne Aguirre. The eBook version is 363 pages. I listened to the audiobook, which clocks in at ten and a half hours and is narrated by Ava Lucas. We follow our two main characters as dual points-of-view.

Danica Waterhouse is a modern witch who co-owns Fix-It Witches, a magical tech repair shop, with her cousin Clementine. Her coven gets together monthly with the cover of being a romance book club. Danica and her cousin have agreed on a pact where they’ll have fun dating but not getting too deep into romance, all while not telling their mother or grandmother (so they can avoid family drama). Danica is allergic to cats, but they tend to follow her everywhere, even though she never feeds them.

Titus Winnaker owns Sugar Daddy’s bakery with his sister Maya, and though his baked goods are phenomenal some customers really come to catch a glance at the hot bisexual Cinna-man who makes them. He loves reading romance novels, probably because he’s never had luck in love. He’s over thirty but still a virgin, and feels like he’s been cursed. He’s a wee bit insta-lovey with Danica, and some of his internal thoughts read a bit incel-y so head’s up there.

There is some worldbuilding, but I wish it was explored more. In this alternate version of reality, witches received their powers ages ago direct from a goddess, and various family lines have different gifts. Some are technomancers, like our main character Danica. Mundanes are never allowed to learn about witches, else they will be turned into animals to keep the secret. If there’s even a whiff of a mundane learning anything about witchcraft, The Council will be on your butt. Danica’s grandmother does not like mundanes at all, and raised her with the belief that if she married a mundane man (like her mother did), she will lose all of her magic.

At the 40% mark, a witch hunter is introduced but that plot line was kind of just dropped. It appears that there will be more about that in the second book, which comes out in April and features Danica’s cousin Clem.

View all my reviews