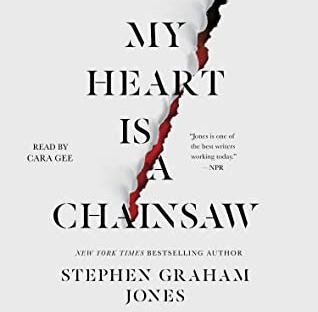 My Heart Is a Chainsaw is a literary horror novel by Stephen Graham Jones. The ebook version is 416 pages. I listened to the audiobook, which clocks in at twelve and a half hours and is narrated by Cara Gee. We follow our main character with a third-person point-of-view.

Jade Daniels is a half-indigenous (Blackfoot) high school outcast who has an encyclopedic knowledge of horror films. After she finds a phone with video evidence of a group of blonde people dying horribly while out in a canoe in nearby Indian Lake, she is convinced that she’s in a slasher story already in motion. And she knows that she’s not final girl material. But she thinks she knows who is…

I greatly enjoyed the book’s framing device, where every other chapter is a term paper that Jade wrote about horror films. I laughed out loud a few times during those chapters. She leans so hard into these types of films as a form of escapism from her own life. It’s very obvious that Jade is Not Okay at various parts of this novel; her father is very abusive and her mother isn’t in the picture. Her closest friend is really the teacher for whom she’s writing these extra credit term papers.

The book felt a bit meandering at times, but it’s a great character study of Jade. And it definitely picks up a lot in the back half. If you’re a fan of the slasher genre, you may love this book. If you’ve never seen a slasher film, Jade’s essays can help with that, but be aware that this book spoils a lot of the examples that are brought up.

This is the first book in a trilogy, and I’m excited to pick up the next installment next February.