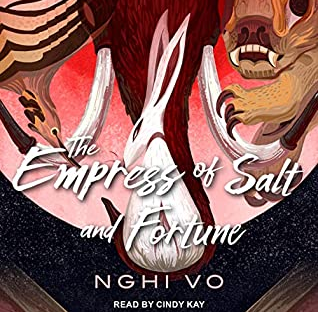 The Empress of Salt and Fortune is a literary fantasy novella by Nghi Vo, and her debut novel. The eBook version is 124 pages. I listened to the audiobook, which clocks in at a little under two and a half hours and is narrated by Cindy Kay.

Chih is a nonbinary travelling cleric seeking the history of Lake Scarlet. They meet an elderly woman named Rabbit, who tells them the story of the Empress In-Yo from the North. Rabbit was sent to the palace as a child to make up for five missing pots of dye in her town’s taxes. She became a loyal handmaid to the empress and followed her when she was exiled after the birth of an heir.

Although this book is not much longer than a hundred pages, the worldbuilding feels expansive and solid in my mind. The format of this book is really interesting, as we are brought through stories within stories, flashbacks, meditations, and dreams. It’s really quite lyrical and almost hypnotic at times. I’m so here for the feminism and the takedown of patriarchy and empire.

View all my reviews