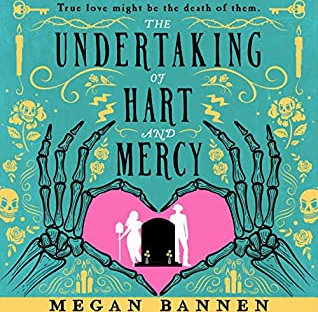 The Undertaking of Hart and Mercy is a fantasy novel with a heaping dose of romance by Megan Bannen. The ebook version is 336 pages. I listened to the audiobook, which clocks in at a little over twelve hours and is narrated by Michael Gallagher and Rachanee Lumayno. We follow our two characters with alternating third-person points-of-view.

Hart is a demi-god marshal, patrolling the magical wilds of Tanria to prevent dredges (think zombies) from attacking citizens. Mercy is an interim undertaker, waiting for her brother to take over the family business. They do not see eye-to-eye at all. To fight his feelings of loneliness, Hart begins writing a letter to “A Friend,” sure that it will not end up in anyone’s hands, but it would help him feel better. But then he receives an anonymous letter back in return, and he forges a true friendship. Little does he know that the reply came from Mercy…

The worldbuilding here was really cool! The setting is fleshed out and interesting, and while I may have been a little confused at first the threads all came together for me at one point and I was all-in. I wish that a map was included in the finished copy of this book, because I think it would have been good to reference to help me connect the threads a lot faster. That being said, I think this is a pretty well-done genre blend of fantasy and romance.

I loved all of the characters–especially the side characters. I absolutely loved both of the talking animals who are mail carriers. There’s a lot of whimsy here, and I see why some other reviewers were comparing it to Studio Ghibli. Also this cover is gorgeous and the few steamy scenes are pretty nice.

If you’re a fan of Ilona Andrews or The Princess Bride, you may like this book. There’s cool, expansive worldbuilding + interesting characters that you can’t help but love. There’s adventure, but at its core it’s a love story with a HEA.

Special thanks to Orbit Books, Hachette Audio, Hachette, and NetGalley for providing an audio galley of this book for me to review. All opinions contained herein are my own. The Undertaking of Hart and Mercy releases on Tuesday, August 23rd.